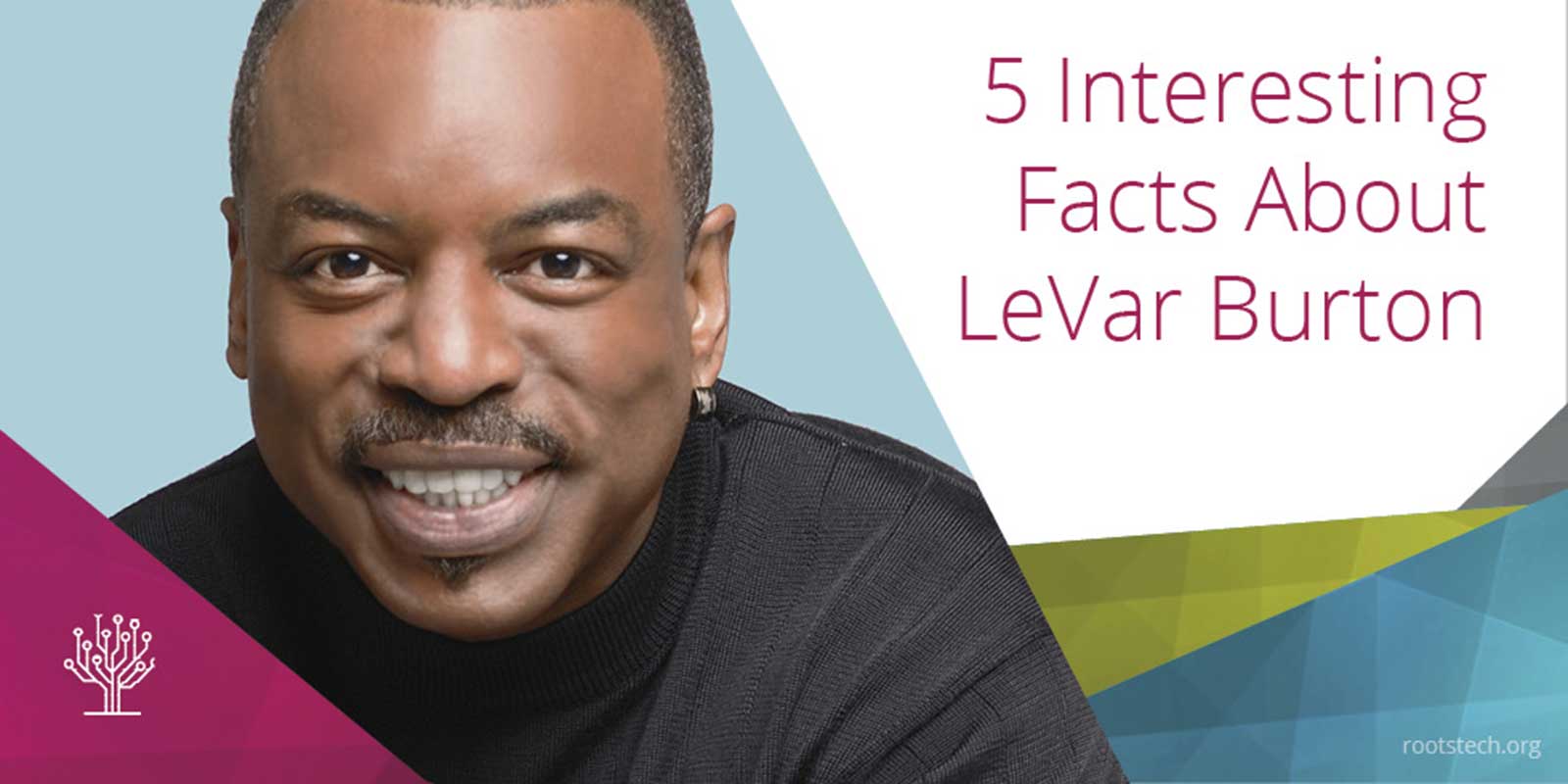 Yes, you heard correctly. LeVar Burton is coming to RootsTech 2017.

“When I heard that LeVar Burton was coming to RootsTech, I was delighted,” said Ekitzel Wood, who has attended RootsTech in the past. “For American adults who grew up in the ‘80s and ‘90s, LeVar Burton was present in our daytime encouraging us to read and imagine, in our prime time going boldly where no one has gone before, and when we began to learn the more difficult parts of our history, he was there. I’m definitely looking forward to hearing him speak.”

Burton burst onto the acting stage when he starred as Kunta Kinte in ABC’s 1977 award-winning television series Roots, a show based on Alex Haley’s novel Roots: The Saga of an American Family. The show, which garnered nine Emmy Awards, was the first of Burton’s professional career.

Burton is also widely recognized as the host and executive producer of Reading Rainbow, a children’s program that aired on PBS for 23 seasons, making it one of the longest running children’s programs on the network. As producer and host of the show, Burton won 12 Emmy awards.

In 1986, Burton also appeared in the Star Trek: The Next Generation television series in the role of Lieutenant Commander Geordi La Forge, a blind engineer who wears an innovative device called a VISOR that allows him to see. Burton later portrayed La Forge in the full length films Star Trek Generations and Star Trek: Nemesis.

While you’re likely aware of Burton’s prestigious acting career because of his performance in these productions, here are five other interesting facts you may not have known about him.

1. Burton was born in Landstuhl, Germany.

Because of his father’s military career, LeVar Burton was born at the U.S. Army Landstuhl Regional Medical Center, located in West Germany. LeVar’s father, Levardis Robert Martyn Burton Sr., was serving as a photographer for the U.S. Army Signal Corps and was stationed in West Germany at the time of LeVar’s birth in 1957.

3. Burton is an advocate for literature in education.

In May 2014, LeVar Burton launched one of the most successful crowd-funding projects in recent history with an attempt to bring Reading Rainbow into the digital age and provide today’s children with access to good books. Burton officially initiated these efforts on the popular crowd-funding website Kickstarter.com, with the initial goal of raising one million dollars. Only days later, the campaign amassed more than 100,000 backers and raised an astonishing $6.4 million.

With the money, Burton said he plans to expand the Reading Rainbow app to Android, Roku, and Xbox. Similarly, he hopes that the app will be available for free to thousands of students in classrooms across the United States. It’s an ambitious project certainly, but one that Burton believes in.

“I have, throughout my career, done my best to use the mediums for entertainment—television, film, storytelling in the entertainment realm—to do more than simply entertain,” he said in an interview with Ross Brenneman of Education Week. “I think we have a real opportunity in this new digital era to revolutionize the way we teach our children—mostly because of the intrinsic nature of storytelling. It’s an elemental part of the human experience.”

4. Burton is not only a talented actor, he’s also an author.

Burton’s talents extend far beyond the movie set; he’s also an accomplished author. Burton’s first book, Aftermath, was published in 1997 and had a first hardcover printing of 35,000 copies, being named a Wordstock bestseller.

Burton’s most recent book, The Rhino Who Swallowed a Storm, was published in early 2014.

5. Burton’s mother instilled in him a love for reading and education.

In an interview with Sam Hockley-Smith of The Kickstarter Blog, Burton said that his love for reading was something he learned from his mother at a young age.

“My mother was an English teacher, and it was expected in her house that you read,” he said. “As an avid reader, my mother always read in front of me when I was a child. I just absorbed that example that reading is part of being human. She always had several books going for her own enjoyment and entertainment, and I really believe that is, in a large measure, responsible. I grew up understanding the value of a relationship with the written word.”

Register for RootsTech today, and don’t miss this opportunity to hear from LeVar Burton.