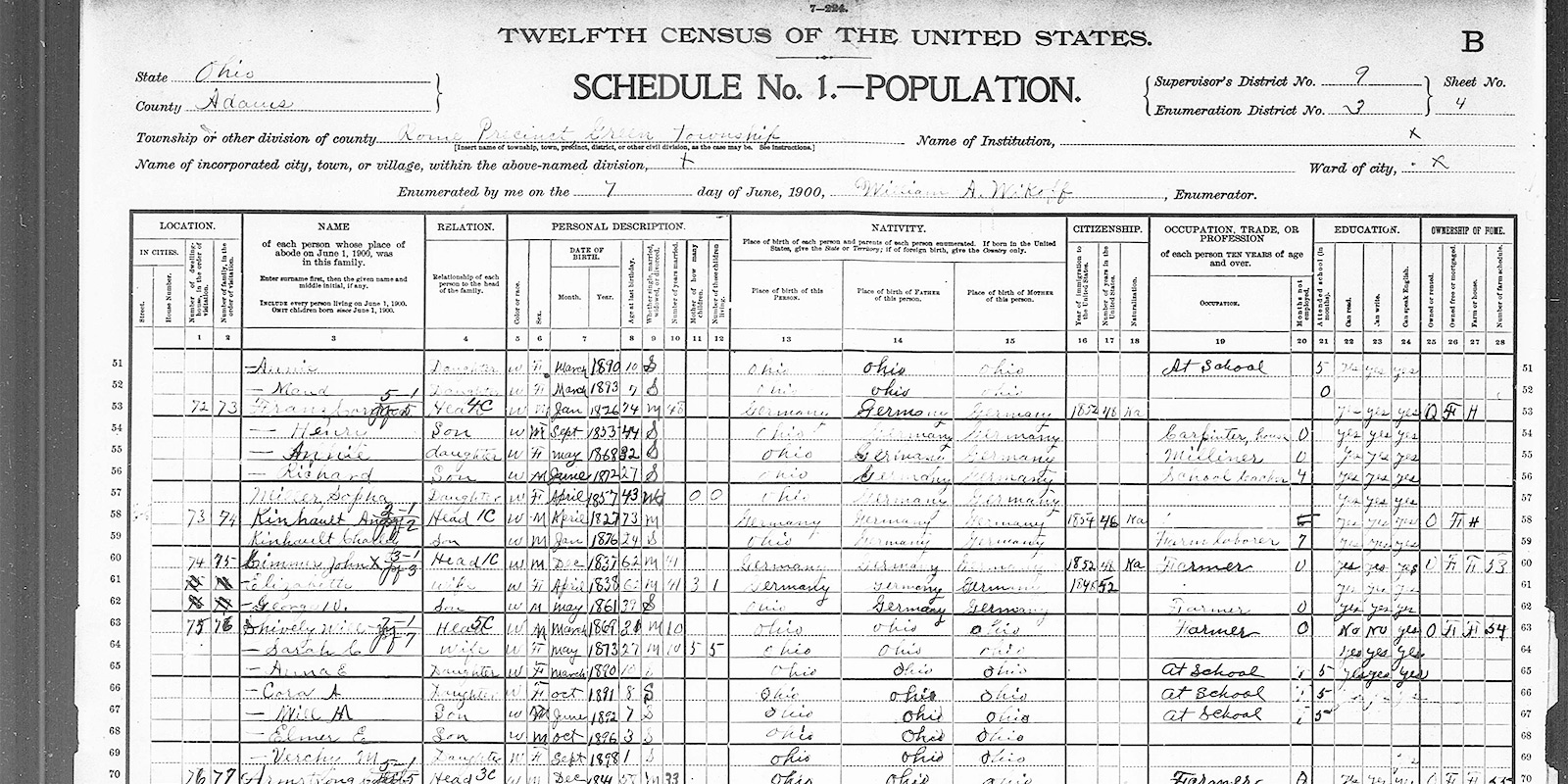 7 Ways to Avoid Commonly Made Mistakes When Using the U.S. Federal Census

This is the third of a three-part series exploring how to find individuals and families in the U.S. federal census. Read part one and part two.

As you pursue your family history, there is a learning curve associated with any new set of records. The U.S. federal census is no different. Part one of this series outlined strategies for finding missing persons. Part two provided suggestions for making the most of the census. This article will examine seven commonly made mistakes when searching the U.S. federal census. These points were presented at RootsTech 2017 by Mary Kircher Roddy, and we’ve compiled a list of her remarks here.

1. Found an ancestor on a census record once? Don’t stop looking.

Enumerators—or the people collecting demographic, economic, and housing data on behalf of the U.S. Census Bureau—were instructed to go from house to house and ask who was at the house on a particular day that was not necessarily the day the record was made. This has led to some people being listed multiple times in the same census. Roddy said that she has found many people listed twice and that she has heard of other researchers finding the same person listed three times. So if you find more than one record that correlates with what you know about your ancestor, check it out. It just might be that for one reason or another, this ancestor was recorded as being in more than one place at the same time.

2. Remember, the censuses family historians use are copies, not the enumerator’s original work.

The enumerator copied the original work twice; one copy was sent to the state, and the other copy was sent to the federal government. Family historians typically view the copy that was sent to the National Archives and Records Administration, and these forms may contain copy errors. Roddy shared an excellent example from the 1870 census that listed a man, a woman, a girl who was 4 years old and a boy who was 1 year old. Also listed in the household was a 14-year-old girl with a different surname. When reviewing the data, she saw that the baby boy was listed as having parents of foreign birth, who were not noted for the 4-year-old girl, and that this 1-year-old went to school. Rather than just accept it as an error, Roddy researched the 14-year-old girl. Not only did the census taker make a copy error, but Roddy discovered relationships that provided context to this family’s story.

In 1870 there were two enumerations. This was the first census taken after the Civil War, and Roddy recounted that “they sent a lot of Yankee census takers down to the South to take the census.” Nicknamed “the carpetbagger census,” it was estimated that the census takers missed 10 percent of the population, so a new census was ordered in particular cities: New York City, Indianapolis, Philadelphia, and St. Louis. If you are researching in these cities in 1870, look for both enumerations.

4. Watch out for fractional age mistakes.

Roddy shared the example of George Hartman whose age was originally recorded as 7/12, but on the 1920 cenus on both ancestry.com and familysearch.org, his age was recorded as 72 years old because of a fractional misunderstanding.

5. Search without a designated gender.

It’s possible that enumerators misrecorded the genders of your ancestors, perhaps because of nicknames or because of semiandrogynous names, like Francis. Roddy suggested that if you cannot find your person in the census and you know that they should be in that location, search without a designated gender.

6. Check the last images in a set for an enumeration district.

The enumerators were required to provide an accurate count. As mentioned above, the census pages used in family history research are copies of the original information. Roddy noted that she has even found a list of unrelated individuals who belong to different households within the pages of the census, particularly in the 1910 and 1940 censuses. Whether these individuals were missed initially or in the process of recording the census copies, it’s a good idea to check the last page of any enumeration district you search. To do this, look at the image number—usually listed, for example, as 3 of 36—and proceed to the last pages, such as 35 and 36.

7. Get to know your census taker; enumerators generally lived in close proximity to where they enumerated.

Generally, enumerators lived near the area that they canvassed. Look for the enumerators’ household. Look at his birthplace and the birthplaces of his parents. Consider the ethnic relationship he would have to those for whom you are searching. If they are of the same ethnic background, they are more likely to know the language and record the names of immigrants accurately.

Additionally, the pages of the U.S. federal census were not necessarily filmed in order. If you find the family that you are searching for at the bottom of a page and there are no additional family members on the next page, check that the household numbers are listed in numerical order. It’s possible that the page was filmed out of order.

Lastly, Roddy recommended paying it forward. When you a find error on any of the sites that provide digital copies of the census, there may be a place to add alternate information or provide feedback. “Go ahead and pay it forward, because you will make some genealogist’s day. And good karma is a good thing.”

What other tips do you have for researching the U.S. federal census? Tweet us @RootsTechConf to join the conversation.