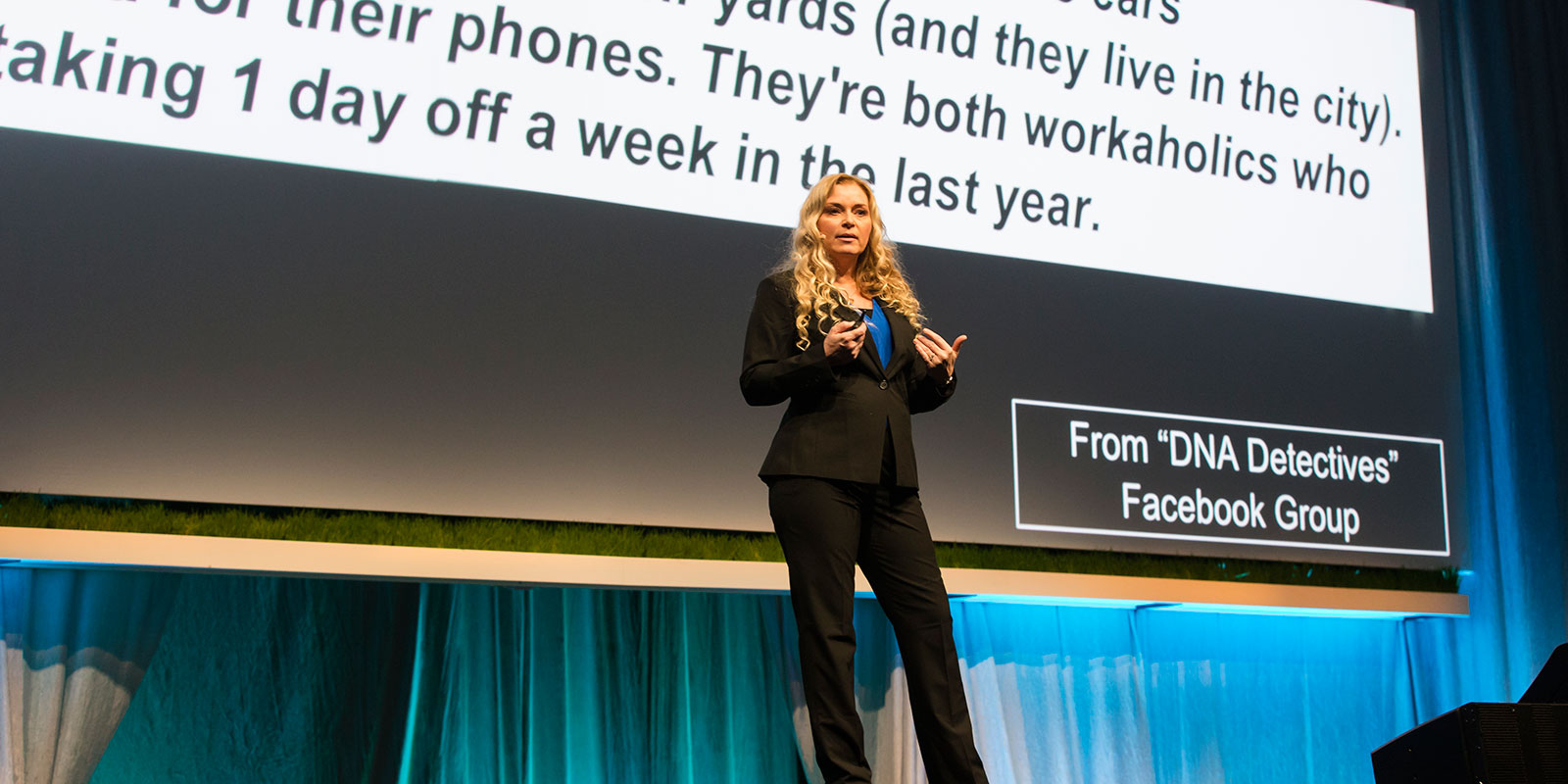 “As human beings we long to connect to our history and to each other—to know where we fit into the grand scheme of things,” said CeCe Moore during the Saturday morning keynote address at RootsTech 2017. And that’s exactly what she does for a living. As a genetic genealogist, Moore uses DNA test results and any other available information to help people make biological connections.

Much of her work is with adoptees who are hoping to find their biological families, but she has taken on cases of all kinds. Forgiveness and healing is often the result of Moore’s adoptee and foundling cases (cases of infant abandonment). Moore related that because of DNA testing, thousands have finally “received answers to their lifelong questions about their identity and the circumstances surrounding their abandonment,” and as a result, many are able to expand their circles of love and support.

Moore has also made fascinating discoveries within her own family. When her brother-in-law, John, became interested in her work, she suggested he take a DNA test. He grew up in a single-parent home and knew little about his ancestry. He had always assumed he had traces of Native American DNA, but when the results came back, he was surprised to learn he didn’t. Instead he discovered that 6.6 percent of his DNA reflected African origin. Because John’s mother was still living, they were able to collect a DNA sample from her as well. Her results showed that 12.5 percent of her DNA was of African origin. At this point, Moore was able to follow the paper trail to discover that John and his mother are direct descendants of one of America’s founding fathers, Thomas Jefferson, and Sally Hemings, a biracial slave at Jefferson’s Monticello estate. The results of this discovery have been life-changing for John and his family.

Moore also spoke on what she referred to as genetic memory, which is the idea that even when biological family members haven’t met, their common biological history influences their choices, habits, and behaviors. She shared many examples of this and then posed the question “For those of us who do not know our ancestry, how important is it that we find out?”

When it comes to the future of genetic genealogy, we have a lot to look forward to, Moore said.

“What we as genealogists are doing is important for understanding the past, for ushering in the future, and for both personal and collective healing. Our work is changing lives, changing society, changing history, and even changing the future,” she said.

“Is the future of DNA research our key to unlocking the past? Will what we learn allow us to glimpse far into the past in ways that have never before been possible?” How far back will it allow us to explore? Decades? Centuries? Millennia?” she asked. “As the scientific research advances, so will our knowledge about our collective and individual histories.”

We know you couldn’t attend every RootsTech class, so we compiled a list of some of the most useful genealogy tips you may have missed.
Linda Clyde, Miryelle Resek, Lizz Miller | Mar 29, 2017