“As you help individuals, families, and whole communities connect through family discovery and family history, you help them heal,” said Steve Rockwood, FamilySearch International CEO, at the opening general session of the 2019 conference. Healing was the main focus for Rockwood and for every speaker following him in this moving and unprecedented opening session of RootsTech in Salt Lake City.

Rockwood encouraged attendees to pay attention to moments of inspiration they experience throughout the conference and to act on their impressions, hunches, promptings, or “aha” moments. “Nothing really happens here until you act,” he said. “Family history is not a spectator sport.”

He talked of his beloved home state of Colorado as the “mother of rivers,” and spoke of how springs originating in the Rocky Mountains flow east and west, eventually growing into mighty rivers bringing life and nourishment to everything they touch. Rockwood then likened a river spoken of in biblical Ezekiel to attendees, a river that had the power to heal that which needed healing. He then went on to say that whole communities and millions of people can be touched by the healing power of family history.

Following Rockwood’s remarks, Elder Bradley D. Foster, Chairman of the Board of FamilySearch International and member of the Quorum of the Seventy of The Church of Jesus Christ of Latter-day Saints, was invited to the stage. His brief remarks foreshadowed moments to come in the session. He called the conference “historic” and then invited Michael B. Moore, President and CEO of the forthcoming International African-American Museum (IAAM) in South Carolina to take the stage and share the vision of the museum with attendees.

Moore himself has deep roots in South Carolina, making his connection to the museum very personal. His great-grandfather was famous African-American Robert Smalls, a man who was born into slavery and in adulthood successfully commandeered a Confederate transport ship to sail his own family and the families of his crew to freedom. Smalls achieved many other significant accomplishments throughout his life, especially considering the time and place in which he lived. For Moore, knowing the stories of his great-grandfather has been a source of strength and courage.

Speaking of the museum’s upcoming construction, Moore expressed the following: “We have a really unique and powerful—a beyond a once-in-a-lifetime opportunity to build an African-American history museum on the site largely where that history began.” Moore went on, “The International African-American Museum will rise and it will tell the stories of those who landed there and their descendants. It will endeavor to tell of their incalculable sacrifices and contributions to the building of this country.”

Most African-Americans don’t know their ancestry past a few generations. “There are some real profound obstacles to African-American family search, probably the most being the brick wall of 1870,” Moore explained. Enslaved Africans were not listed in the United States census before this time. This has made finding the ancestors of African-Americans extremely difficult, if not impossible. 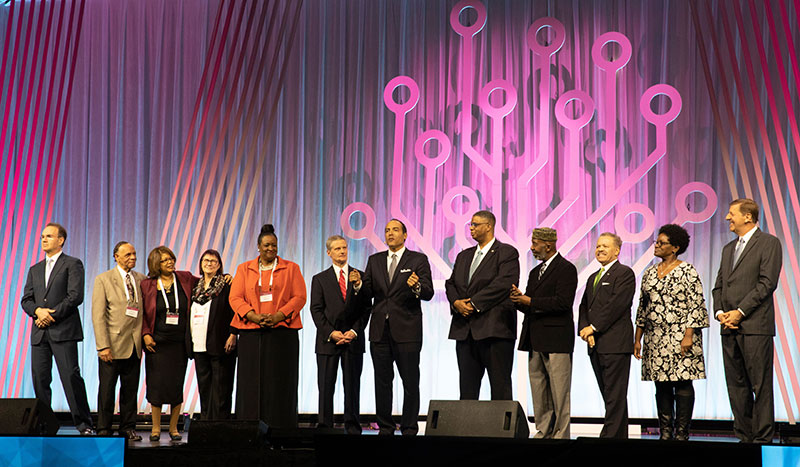 The International African-American Museum has plans to include the Center for Family History which, according to Moore, will “empower people to find their personal strand in that story and to personalize the broad history in very powerful ways.”

Moore also shared his own recent DNA Discovery. A test revealed that his ancestry stretched back to the Mende people of Sierra Leone. On a business trip there, Moore was surprised by his associates to receive a homecoming by the Mende people. Describing the experience, he said, “They adopted me, they named me, they fed me, they prayed for me, they clothed me. It was just the most profound experience.”

Moore has hopes that bridges to the past will continue to be built for other African-Americans. “As the leader of a museum that is aspiring to create a world-class institution that will help people, because I have experienced this myself, it gives me a unique frame of reference to then want to extend that same kind of experience to others,” he said.

After Moore’s closing remarks, he and his team joined Elder Foster and Elder David A. Bednar of the Quorum of the Twelve Apostles of The Church of Jesus Christ of Latter-day Saints on the stage.

Elder Bednar, also Chairman of the Temple and Family History Executive Council of the Church, shared the following: “I have reflected upon the important connections that will be made by, and the increase in sense of belonging that will come to, those of African descent who visit this historic facility. The Center for Family History will be a preeminent center for African-American genealogy in the world and will help their guests reconnect with their personal family histories both here in America and elsewhere.”

Bednar went on to say, “The Church of Jesus Christ of Latter-day Saints, through FamilySearch International, is making a concerted effort to help establish a bridge back to Africa, so individuals can reclaim their African roots.” Following Bednar’s remarks, he presented Moore and his team with a 2-million-dollar contribution for the Center for Family History, which will be housed in the museum.

The historic contribution and partnership announced at the opening general session of RootsTech 2019 was followed by the announcement of another esteemed guest, Martin Luther King III, the eldest son of Martin Luther King Jr. and Coretta Scott King.

Like his father, King III is an advocate of American human rights and spends much of his time working as a community activist. Of special interest to King III is supporting and teaching young people. He is tirelessly dedicated to expanding his father’s ideals.

In the session, King emphasized that his father’s dream was much bigger than desegregation. “His vision was of a fully-integrated society,” he said. He went on to quote his father saying, “Desegregation is only a partial, though necessary step toward the ultimate goal, which we seek to realize. Desegregation will break down legal barriers and bring men together physically, but something must happen so as to touch the hearts and souls of men, that they will come together not because the law says it, but because it is natural and right.”

King III endorsed the International African-American Museum and praised The Church of Jesus Christ of Latter-day Saints for its substantial contribution to the Center for Family History. “You are essentially creating a portal through which the world, our nation, and particularly God’s children of African descent, can look back through time and feel the healing connections of family and faith that will strengthen our global community for the future.”

Steve Rockwood returned to the stage after King III and closed this momentous session with additional emphasis on the power of family history to heal families and foster connection and belonging.

The incredible vocals of the a cappella group, The Edge Effect, were interspersed throughout the session, a perfect addition for the inspiring messages shared at the opening of this historic conference.