In one of the most memorable keynote sessions in RootsTech history, Saroo Brierley touched attendee hearts with his remarkable story of reconnecting with his homeland and biological family after being separated for more than 20 years.

“I had to go back, in order to move forward” 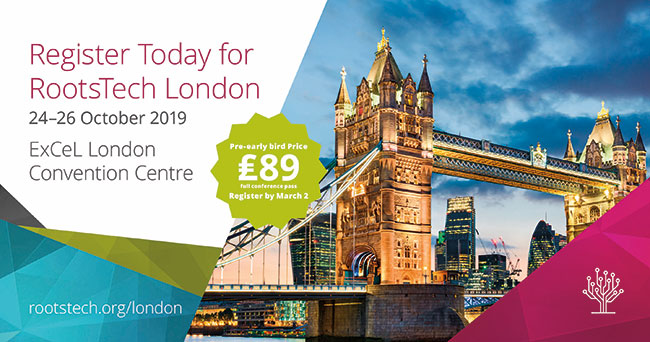 Registration for RootsTech London is now open! Take advantage of pre-early bird pricing and register by March 2 to get your full conference pass for only £89—our absolute lowest price! One-day passes are also available for only £49. Visit the London experience booth in the south foyer of the Salt Palace to learn more and to register. Complete your London registration and you’ll get an exclusive RootsTech London T-shirt!

Don’t miss world-renowned ukulele musician Jake Shimabukuro in tomorrow’s general session! Shimabukuro is not only an accomplished musician who has performed for underprivileged children as well as royalty, but is also a devoted husband and father who understands the premier role of the family.

The seeds of music and family were sown early in the life of Hawaii-born Jake. When he was four years old and his fingers were long enough to reach the chords, his mother, also an accomplished ukulele player and singer, placed a ukulele in his hands.

It was love at first strum.

In his youth, Jake played for hours in his room. His appreciation deepened for the ukulele and his Hawaiian culture that inspired such a happy instrument.

In time, he was pleasantly surprised to discover that local radio stations in Hawaii were playing his music. Since then his records have repeatedly topped the Billboard world music charts. He is the winner of multiple Na Hoku Hanohano Awards, the Hawaiian equivalent of the Grammy.

Jake’s infectious love of life and his engaging smile connect with audiences around the world. He has played with many distinguished musicians and orchestras in such well-known venues as the Sydney Opera House, the Hollywood Bowl, and Lincoln Center.

Jake Shimabukuro is “an inspiring and inventive musician whose virtuoso skills o.n the ukulele have transformed all previous notions of the instrument’s potential,” stated a 2012 documentary of his life titled Jake Shimabukuro: Life on Four Strings.

Jake’s virtuoso happy ukulele performance will begin at 11:00 a.m. on the main stage.