RootsTech Then and Now

As RootsTech marks its 10th year, we look back on how it has made history—and celebrate its success.

“A rock concert!” “A TED convention for genealogists.” “Edgy and different and a great vibe.” This is not how people typically describe genealogy conferences. But that’s what attendees Dick Eastman, Renee Zamora, and Joan Miller said about the very first RootsTech, held in Salt Lake City in 2011.

What were they raving about? While a conference for family historians and tech innovators wasn’t a new concept, RootsTech was something different. Keynote speakers bounded onstage to lights, music, and jumbotron screens. Classes by experts posed big-picture questions. The Expo Hall buzzed with vendors, public workstations, and a fully-equipped game room.

Now in its 10th year, RootsTech continues to inject unique energy and momentum into the global genealogy community. RootsTech is more than a conference, more than a trade show. It is an annual celebration of heritage—and everyone is invited.

What do you remember about your first RootsTech? As you read these memories from RootsTech founders, we invite you to reminisce with us! #RootsTech10years

“Roots” + “Tech” = Something a Little Different

Ed Donakey, deputy chief genealogy officer for FamilySearch, recalls that the first RootsTech was conceptualized, planned and executed in about seven months. “That was an incredibly short time frame for an event of this magnitude,” he says.

As Donakey describes it, “The idea started with a conversation between Jay Verkler, then-CEO of FamilySearch, and David Rencher, chief genealogy officer of FamilySearch.” Verkler remembers observing many new developments in technology that could have a massive impact on the field of genealogy. Combining genealogy and technology in the same forum had been tried before, but, as Verkler put it, “Sometimes these two disciplines were a little like oil and water.” Donakey remembers being called into a meeting two hours after Verkler’s and Rencher’s initial conversation, “We put together a business plan and ran with it. We ran fast.”

The planning committee put Anne Roach Teerlink at the helm. She recalls, “When I was asked to put on RootsTech there was no name, no website, no URL, no team, no budget, nada, nilch, nothing.” She reserved conference space at the Salt Palace Convention Center without knowing how many people would attend.

Keynote speakers and classes were the next priority. Those chosen to participate were luminaries in their fields: Brewster Kahle, founder of the Internet Archive; Shane Robinson, then chief strategy and technology officer for Hewlett-Packard Company; and Curt B. Witcher, a leading voice and early technology adopter in the national genealogy community. Classes were planned in two tracks: one for tech creators and one for tech users. 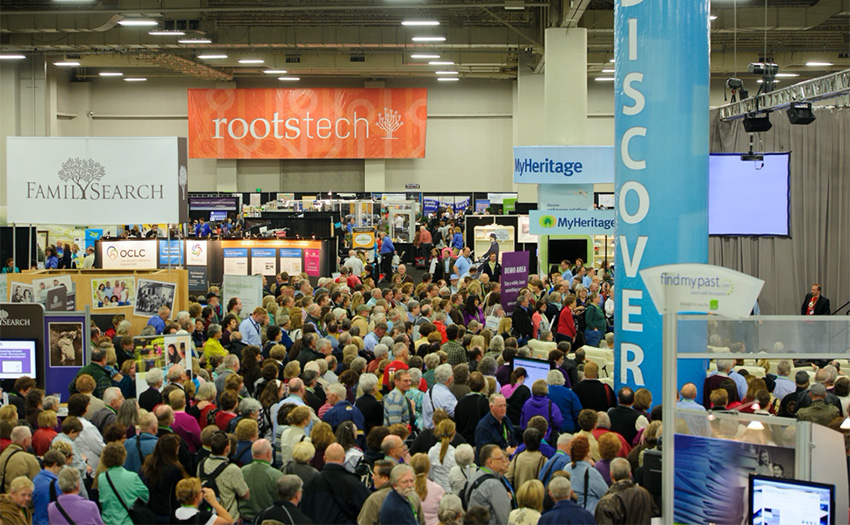 Despite the short lead time and the uncertainties of a first-time event, attendees flocked from across the United States and 15 additional countries, including China, New Zealand, Australia, Namibia, and Israel. Over 3,000 came in person. And—something novel—another 4,700 tuned in remotely. “The broadcasting of live sessions to give people a taste of the pie [was] something that had never been done before at any genealogy conference,” remembers Teerlink.

Everything about the event—the turnout, the speakers, the energy, the glamorous touches—impressed attendees. “I believe this is a record number for a genealogy conference in North America,” wrote industry reporter Dick Eastman. “That's a significant number for a first-ever event!”

Many seemed especially energized by impromptu brainstorming with tech developers about how to meet crucial genealogy needs. Attendee Polly Kimitt remembered that "people emerged from these [sessions] with eyes sparkling.” A meeting between attendee James Tanner and FamilySearch developers led to collaboration. “I volunteered to [digitize] the Mesa City [Arizona] Cemetery records” using their new program, one intended to make digitizing small record sets less expensive, he says. “The [resulting] program is now used . . . around the world.”

A second year of RootsTech followed a similar model as the first, but with an even better turnout (4,500 attendees and 7,000 virtual participants). As Verkler put it, “The success of the first RootsTech gave clear validation of the concept.  It wasn't a difficult decision to put together the next conference. . . . We extended the technology collaboration methods and sessions, [and] encouraged more spontaneity and fun.”

Genealogist Randy Seaver still recalls Verkler’s 2012 keynote address, where he expressed his hope to build “an interconnected family tree where everyone collaborates with others.” After this, Seaver wrote with apprehension about whether it could actually happen. Today, the resulting FamilySearch Family Tree is the world’s largest family tree, with over 1.2 billion ancestral profiles.

A New Direction for RootsTech 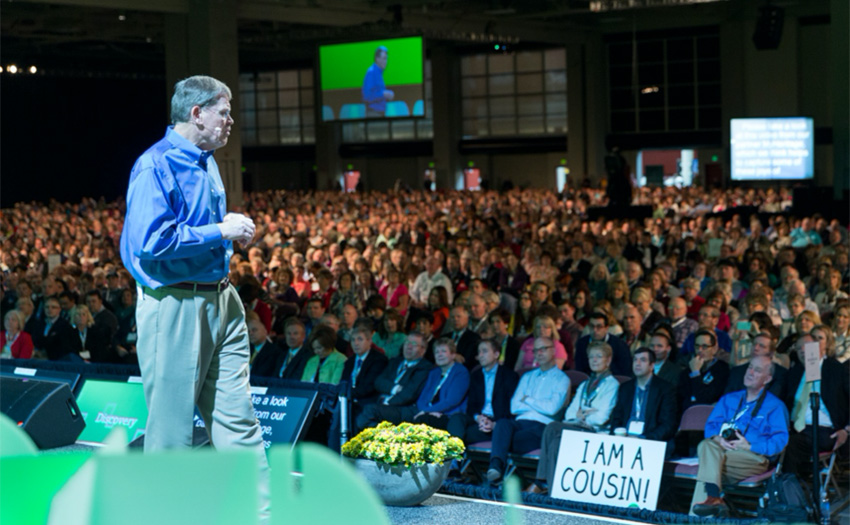 After the first two years, conference organizers decided to invite another audience—people new to family history, including young people. The 2013 event offered more than 250 classes and workshops, with dedicated tracks for beginners, experienced researchers, and developers. A free, full-day Family Discovery Day event was launched for families and youth from surrounding cities.

Technology remained a key teaching topic, but a new emphasis arose on helping attendees connect meaningfully with the past. According to Renee Zamora, “It wasn't until the third year of RootsTech that I caught the [true] vision of what we were doing.” She blogged about Dennis Brimhall saying that “a future generation [will] want to know us as passionately as we wish to know our great-great-grandparents.” She realized, “They would want us to record the fabric and embroidery of our lives. They want our stories.” That day, Renee says, “I turned from a genealogist into the keeper of the family stories.”

Growth from Then to Now

“It has been fun to see how the audience has grown with us,” says RootsTech program manager Jen Allen. “Many started out as beginners but move up each year to more intermediate and even advanced on some topics. We strive to create a conference that is welcoming to all skill levels, but particularly for the beginner.” 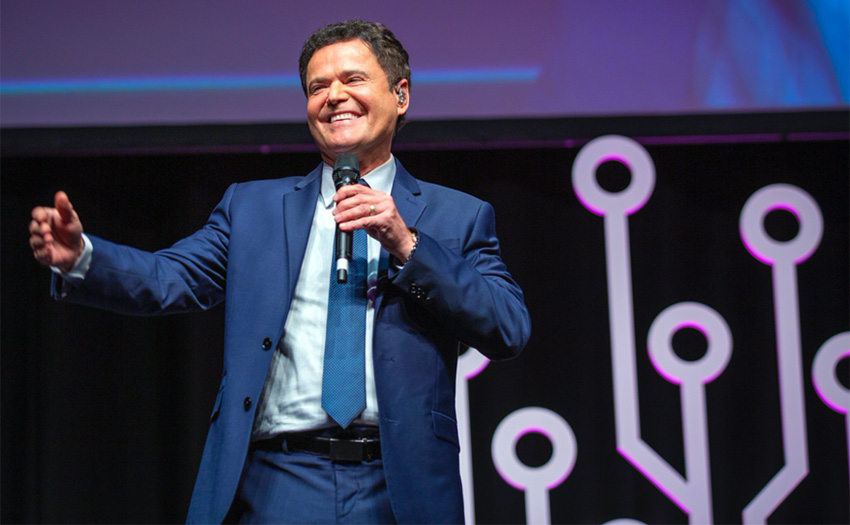 The full RootsTech experience goes far beyond the lecture hall. “As we expanded our audience to beginners, youth, and families, we looked for entertainment and keynotes with more broad appeal,” recalls Dan Call, a former RootsTech logistics manager, now a discovery experience manager for FamilySearch.

Who Do You Remember? RootsTech Keynote Speakers and Entertainers

Looking Forward: The Next 10 Years of RootsTech 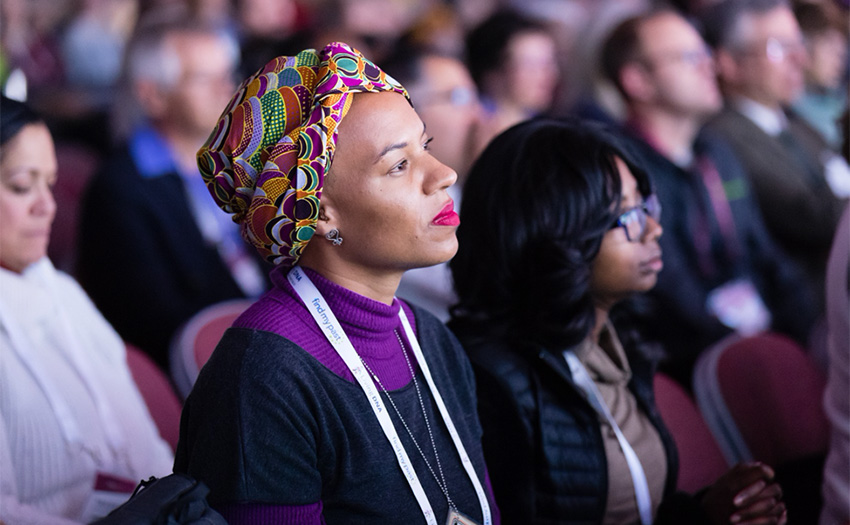 “The future’s never been brighter,” says Steve Rockwood, current CEO of FamilySearch, when asked about the next 10 years of RootsTech. With the theme for 2020 being, “Discover the Story of YOU,” Steve says that the purpose is to “really help people with their individual and family history as it unfolds. . . [If you capture your story, past and present], you’re only going to benefit the future.”

Rockwood further states that he wants RootsTech attendees to have “inspiring experiences” and “make connections.” As he describes it, connections are “why we bring people together [at RootsTech], both in person and online. . . [We] hope that they’ll connect to their homelands and to others that share their homelands. We hope that they’ll connect to their families. And even discover new family members while they’re here.”

Looking at the most recent years and projecting forward, Rockwood anticipates RootsTech will continue to expand and include many more people. “We started to include beginners…[and then] youth…and now we’ve expanded geographically,” he says. As RootsTech continues to connect families around the globe, Rockwood looks forward to more archivists (whom he calls RootsTech’s “rock stars”), commercial partners from various platforms, and many more joining in the RootsTech experience, as different industries discover what family history can do for their people. As Rockwood says, “[We] hope that we’ll always find ways to spread the joy, and RootsTech is one way to do that.”

Did this article bring up some great RootsTech memories of your own? Share them on social with #RootsTech10years. And if you haven’t registered yet to attend (in-person or virtually), go ahead and explore what’s happening at RootsTech 2020.

More from RootsTech Founders and Staff:

This article, more than a dozen people shared their memories of RootsTech: how it started, how it has evolved, how it has mattered to them. You can read more about the RootsTech experience in the quotes below.

Class offerings for RootsTech have increased dramatically over the years of RootsTech, with technology remaining a major—but not exclusive—focus. “We have had a huge emphasis on advanced technology, and then we shifted more toward records and then a shift to [include] DNA,” —Tara Bergeson, event manager for RootsTech.

About the Famous RootsTech Expo Hall

“[The Expo Hall] is a place for attendees to find the latest and greatest ideas that are happening in the genealogy world. . . . It is a place for new businesses to grow and reach new customers and find new partners to grow the industry. The size grows continually. Each year there are new companies. It is . . . exciting to watch companies that started out new [that are now] growing and wanting more space.” —Brandon Beckstead, RootsTech logistics manager

“It’s also fun to have the events in the Expo Hall, which we’ve had from the beginning. . . . I will never forget the openings of the Expo Hall with the bagpipers, hula dancers, and the Pecos Posse folk singers.” —Dan Call, FamilySearch discovery experience manager

“Companies . . . sometimes lose sight of the need to collaborate with standards and conventions for the good of the users and customers they serve.  RootsTech has contributed to raising this ‘community collaboration’ consciousness.”—Jay Verkler, former FamilySearch CEO

“RootsTech continues to celebrate innovation, and we try to provide a place for innovators to identify opportunities in the market,”—Jen Allen, RootsTech program manager

“In the beginning, it was all about technology and genealogy. Now it’s more of how a person is part of a larger story. . . . Technology is only one of many tools to help people understand where they fit in.” —Michael Provard, RootsTech logistics coordinator

I’m excited to announce that RootsTech 2021, which was scheduled to be held February 3–6 at the Salt Palace in Salt Lake City, will now be an entirely virtual conference! My team made this short video below detailing what you can expect from a virtual conference:
Jen Allen | Sep 1, 2020

Healing and Family History: The Emotional Side of DNA