Brandon Stanton at RootsTech—Stories of Humanity, Hard Work, and Success

Seven years ago, Brandon Stanton grabbed the reins of his life and began to steer it in a vastly different direction, never realizing the evolution that was about to take place. He had been working as a bond trader in Chicago and in 2008 he began to lose money and eventually his job, but the day he lost his job he described as “a good day.” It was an autumn day and he decided to go for a walk. On the walk he realized that the job he’d just lost had been a thief of his thoughts and led him to obsess about the market. He explained that at the time he could have been sitting in a concert with his favorite band playing and wouldn’t have been able to think about anything but work. It was time for a change and Stanton recognized an opportunity before him.

He felt his perspective begin to change and decided he was only going worry about making enough money to get by. He would then give his time and thoughts to activities that nourished him. He had always felt like he wanted to do something meaningful. He began to formulate a plan that included something he loved, photography.

One day while he was commuting in Chicago he saw two mothers standing behind their children across from him on the subway, to him, the image depicted childhood. He found himself wanting to capture it with his camera, but he was scared. He lifted up his camera and took the shot. A sense of pride and accomplishment immediately followed. The photo he took that day represents overcoming the subtle, yet common, fear of interacting with strangers. He wasn’t afraid anymore.

He decided he was going to move to New York City. Money was tight and he had to call in some favors from friends to make the move, but he did it. He’d never been to the Big Apple before actually moving there. His plan was to use his camera to create a photographic census of New York City. He set some goals and then set to work. He posted his photography on social media. It took time to get traction and generate followers. Stanton talked about moments that became milestones in his evolution as a professional, and these milestones are marked by specific photos.

The Power of Story 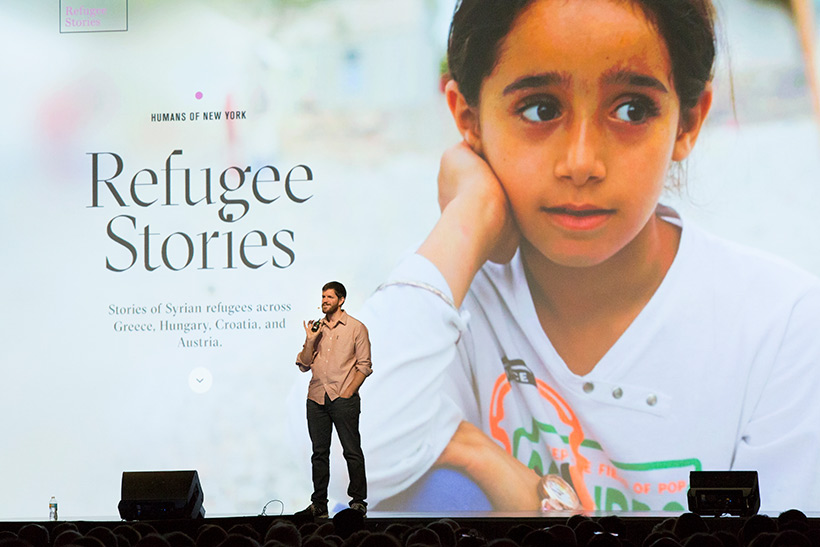 The photo that marked an important turn in his journey was a photo of a woman wearing green from top to bottom, including her hair. The woman had explained to him that she used to wear a different color every day until she wore green. She fell in love with green and had been wearing green every day for 15 years. Stanton decided to caption her photo when he put it on social media and afterward noticed his “likes” took a boost. It was then he realized the power of story.

Today, Stanton’s blog, Humans of New York, is foremost a storytelling blog, a place where the intimate stories of perfect strangers are shared with the masses in an authentic, relatable way. The blog has millions of followers and to date Stanton has captured the photographs and stories of over 10,000 people. He has now travelled to over thirty countries to photograph and interview people of other cultures and has developed a variety of photography collections showcasing specific groups such as refugees, cancer patients and prison inmates. A more recent endeavor of which Stanton is proud has included a Humans of New York video series now published on Facebook.

The crowdfunding capacity of his Stanton’s blog following is impressive; his philanthropic followers have generated over 10 million dollars to donate to multiple charities and even for very specific causes, such as coming up with eight-thousand dollars for a Pakistani man to purchase a new tractor.

Nothing but Hard Work

Despite his success, Stanton remains grounded and devoted to the work he loves. During his keynote address he shared a variety of learned truths he’s picked up along the way, including the importance of hard work, saying, “following your dreams is nothing but hard work.” He believes our goal as individuals shouldn’t be to get to a place where you don’t have to work, but to get to a place where you get to choose your work. He advised not waiting for the perfect idea to come along, but to work hard and make room for the evolution of both yourself and your ideas.

In relation to people, Stanton has learned the most. He now knows personally that everyone has a story to tell and that for some, their story is all they have to offer. When asked why people share such personal stories with him, his simple answer was, “I ask.” He went on to share that, “The feeling of being validated, the feeling of being heard unlocks something in people that allows them to share.” These days Stanton never hesitates to ask strangers about their lives, claiming that in our age of selfies and selfishness that listening is “a scarce commodity.”

“An Honorable and Upright Man” 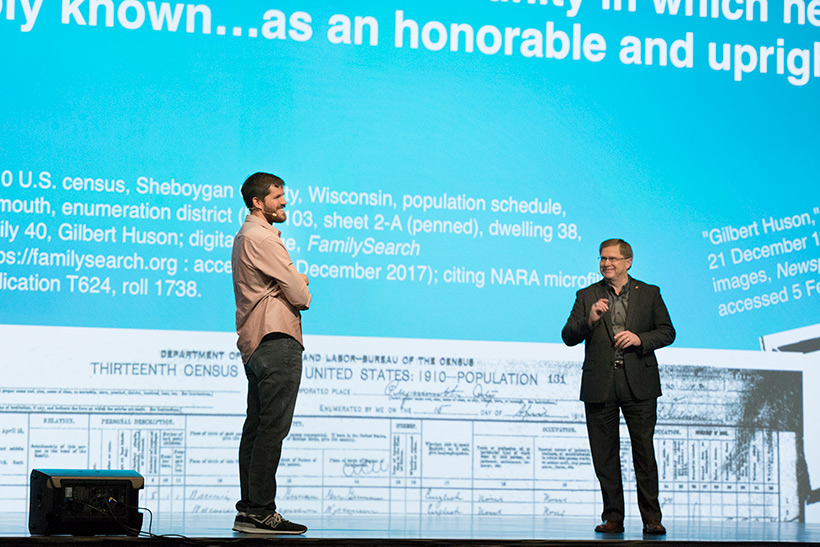 As Stanton closed his remarks he was met on the stage by David Rencher, Chief Genealogical Officer of FamilySearch International and was presented with information about his ancestry which included a handful of upstanding men, one of which was described in a 1894 biographical sketch as “a wide awake young businessman, identified with whatever promises to be of advantage to the community in which he lives. He is well and favorably known . . . as an honorable and upright man.” Truly, the same can be said of his great-great grandson, Brandon Stanton.