Just being in Salt Lake City flooded Scott Hamilton with what he called “spectacular memories.” The cheerful, energetic, 5’ 4” Olympian spent his first moments on stage recounting his memories in Utah beginning with the 1984 United States Figure Skating Championships held at the Salt Palace, the national event which happened to be the victory that set him up for the Olympics. He shared fond memories, including learning how to do a backflip in the very room in which he delivered his keynote address.

Hamilton admitted that like most RootsTech attendees, he came to the conference in search of answers, and as an adoptee with a complicated medical history, he came to the right place.

When he was young he became sick with an illness in which doctors struggled to diagnose. For four years his parents took him from hospital to hospital exhausting much of their resources. It wore them out. Their close friend and family doctor suggested that they take a Saturday morning off each week by putting young Scott in an ice skating class at the local university. They did so and before long his health began to improve. Hamilton lightheartedly explained with a chuckle that initially he wasn’t very good at skating. He lacked focus and all he wanted to do was play tag and jump and spin, but with time the discipline came.

When Hamilton’s skating reached the junior level his mom was diagnosed with cancer, an illness that he wasn’t familiar with at the time. She didn’t seem to be upset about the diagnosis and so Hamilton assumed she would be okay. He spoke a great deal about his mother and her selfless character and about her willingness to sacrifice for him and his siblings. Shortly after he competed at nationals at the age of eighteen, his mother lost her battle with cancer and from that time forward he vowed to honor her in every single thing that he did.

After his mother’s passing, Hamilton had a variety of mentors and parental figures that had a positive impact on his life. One wealthy, childless couple from Chicago who had been sponsoring his skating before his mother’s passing stepped in to take on an bigger role in his life after she died. With their support and his newfound determination to honor his mother, Hamilton went from being 9th in the country to 11th in the world in a single year.

A need for new coaching arose that took him to Philadelphia where he met another mother figure, Barb Camp, a woman he described as “my other mom.” She took him in and gave him the home he needed while he continued his training. She was there for him when he needed additional nurturing and her own children became much like siblings to him.

His new coach in Philadelphia, Don Law, became a father figure to him and was by his side through two Olympics, four World Championship titles and an Olympic gold medal. Hamilton’s father was still alive and would come to all of his competitions, but Don Law was with him on a daily basis working hard to develop him into the champion he became, instilling in him integrity and discipline that carried him through his many accomplishments. Hamilton spoke of the passing of both his father and Don Law with emotion, grateful for the significant contributions they made to his life.

A Family of His Own 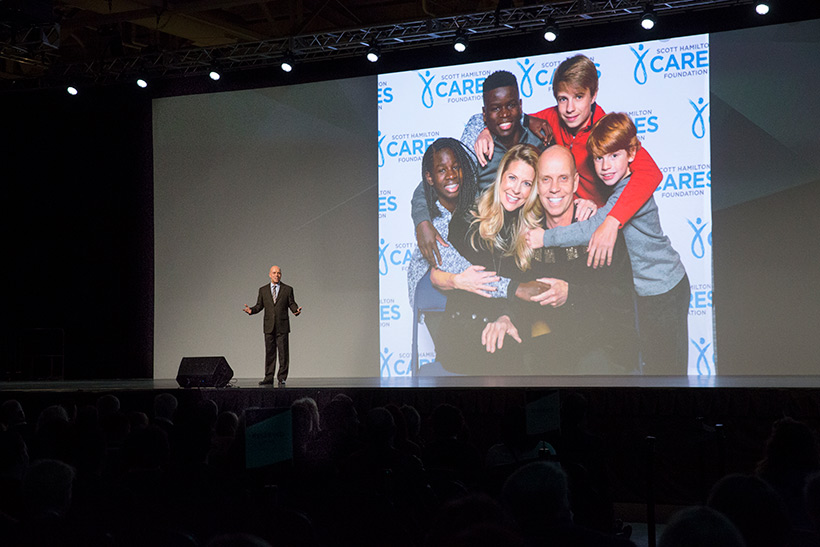 Hamilton now has a family of his own. He described the greatest day of his life as the day he married his wife, Tracie Rose Robinson, now Tracie Hamilton. They both desired a family, but because of his bout with testicular cancer, Hamilton was unsure if they would be able to have children. Nine months and two days after their wedding day, their first son, Aiden, was born. Being an adoptee, Hamilton tenderly described holding his son for the first time. It was the first time he had ever seen flesh of his own flesh. “It was a feeling like no other. It was extraordinary,” he said. Not many years later their second biological son, Max arrived.

In 2010, when the massive earthquake hit Port-au-Prince, Haiti, Hamilton’s wife found herself desperately wanting to do something to help those struggling in the country. She made multiple trips with a medical mission group to serve those who had been affected. On these trips she encountered and connected with two orphaned children that the Hamilton family eventually adopted as their own.

Hamilton closed his remarks with reflections on his miraculous journey and his continued longevity despite his recurring battles with cancer. He spoke lovingly of his adoptive parents and mentors saying, “As I think back and remember of all those amazing times where I had so many mothers and a couple of great fathers, I just am charmed and almost taken aback by how it all starts.” He went on to say, “We have to celebrate and honor our past … We’re here to celebrate love. We’re here to celebrate family. We’re here to solve mysteries and to truly understand our identity.”